Designing for a square walled-garden

This is an almost square, traditional walled garden of a four storey Victorian house in Richmond. It has beautiful old stock bricks on the two walls either side, but the end of the garden was spoiled by a tatty fence and trellis covered in ivy and a really massive old wisteria. There were raised beds, again in old stock bricks, all around the garden, but with an odd mixture of curves and straight lines, which created a rather odd look – like it wasn’t sure what it wanted to be.

A lot of the planting wasn’t what the Client wanted, but what she’d inherited from the previous owners, however, there were some nice shrubs and a couple of roses she wanted to keep.

Probably the best feature of the garden was the Yorkstone paving consisting of a wonderful range of slabs in an array of shapes and sizes. The main problem was that the beautiful paving was hidden by an army of pots, ornaments and other assorted odds and ends and it’s pointing had been neglected for far too long and was in need of some attention.

There was also a distinct lack of storage in the garden and she was fed up of having bikes and golf clubs in the house. 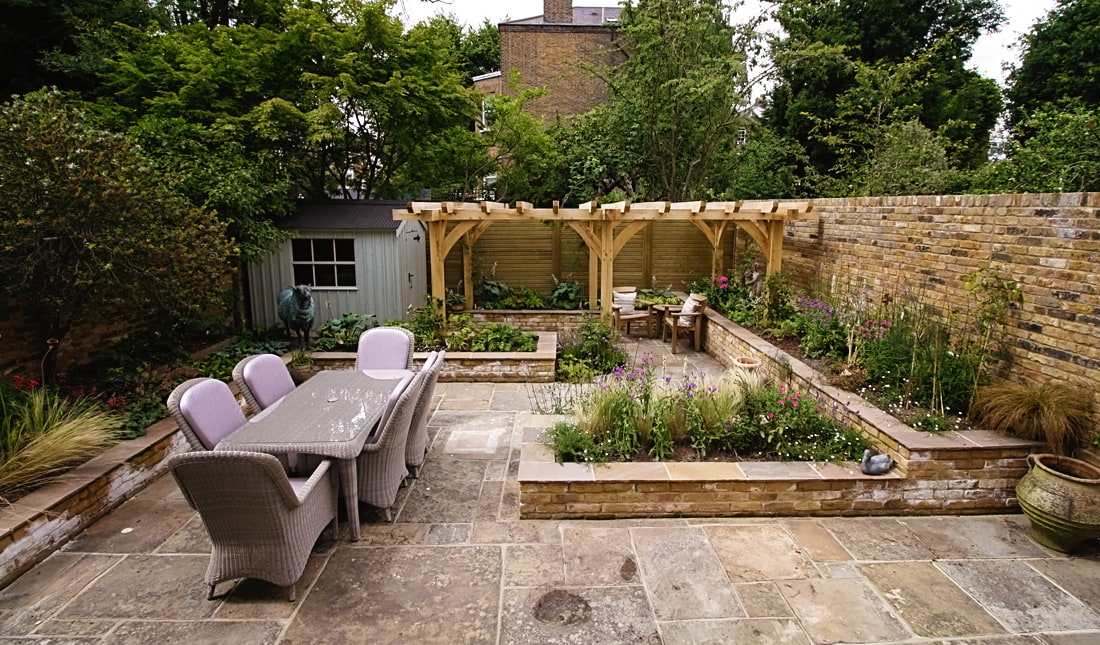 I am thrilled with my garden – it looks better than I I ever thought it could. The planting is beautiful and, as requested, lush enough to ensure very little weeding is required.  I have the storage & seating I wanted and it is a delight to sit in and enjoy. Steve’s iterative approach meant that I could be as  involved as I wanted to be at all stages, whilst he could come up with fantastic design ideas that I would never have thought of!  Many thanks Steve, I love it.

The brief from the Client was quite simple. She wanted a variety of lush planting with beds using straight lines, not curves, to be more in keeping with the more formal feel of the garden created by the high brick walls. She also wanted room for a couple of areas of seating, one with a dining table for 6 and another more informal area for her and her husband to sit and have a drink, along with a shed for the bikes and golf clubs – they needed to be moved out of the house as it was undergoing a complete refurbishment. The final piece of the jigsaw was a new wisteria to replace the one that had to go.

The design fell into place quite easily as the shape of the garden lent itself to a series of raised beds of differing heights to create the two ‘rooms’ for the seating areas the Client wanted, whilst at the same time providing the space for the lush planting required. To provide some height and structure in the garden, a stunning bespoke hardwood oak pergola was designed to fill the gap between the shed and wall and create a framework for the new wisteria and other climbers. The tatty back fence/trellis was replaced with the sleek lines of a more contemporary high quality fence with the shady back corner becoming the obvious location for a smart shed to store the bikes and golf clubs. 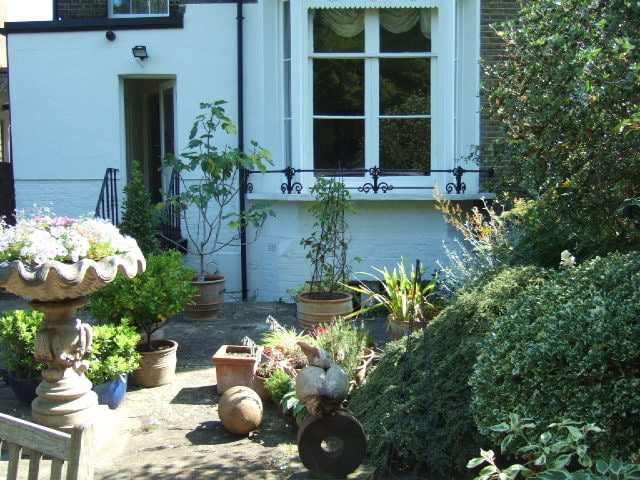 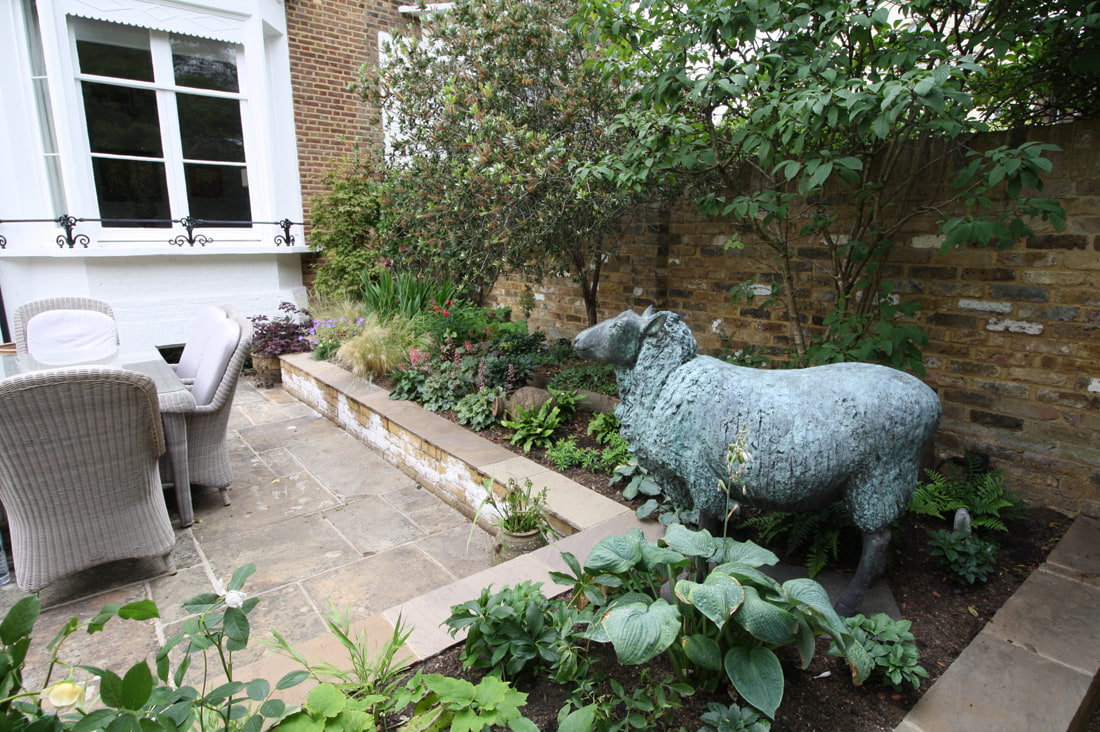 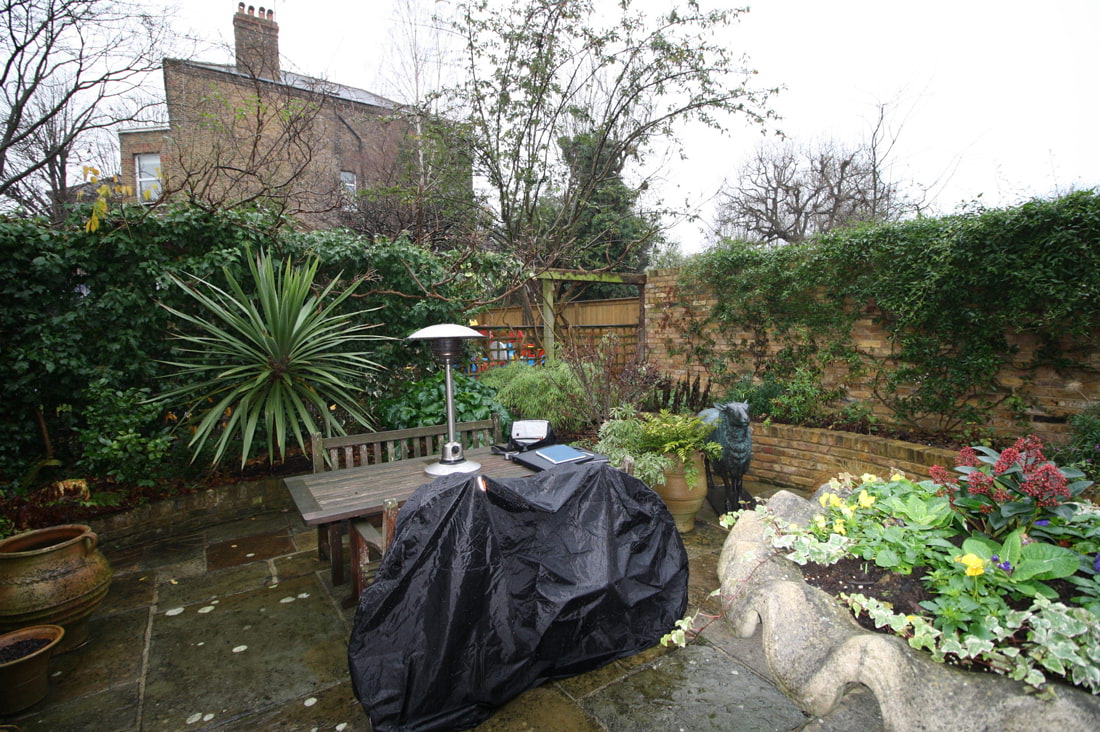 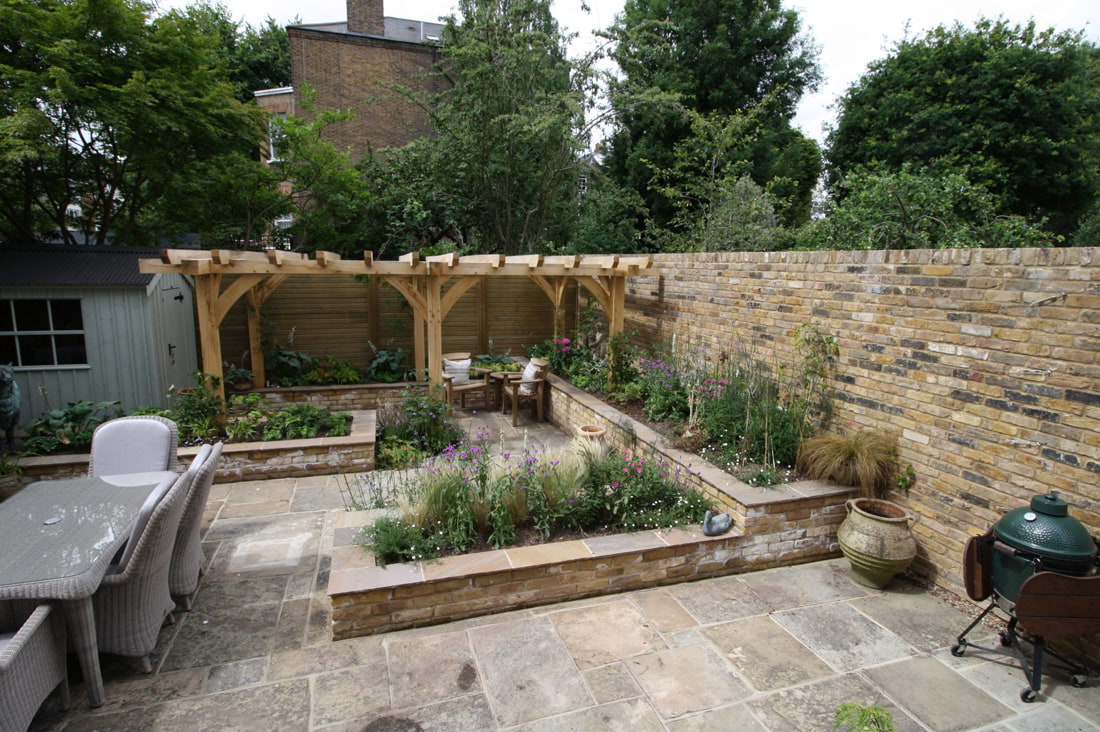 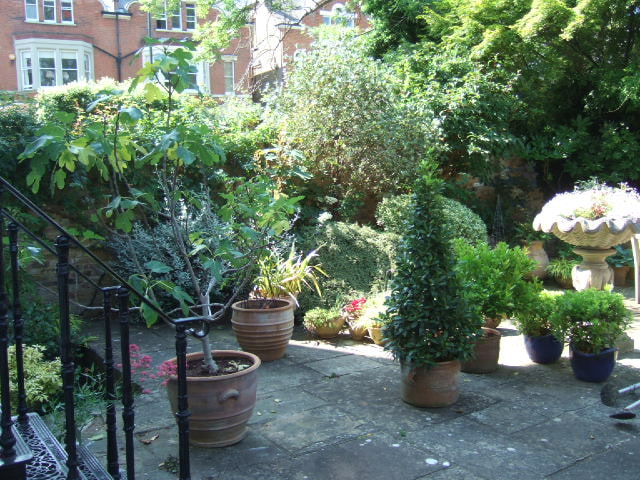 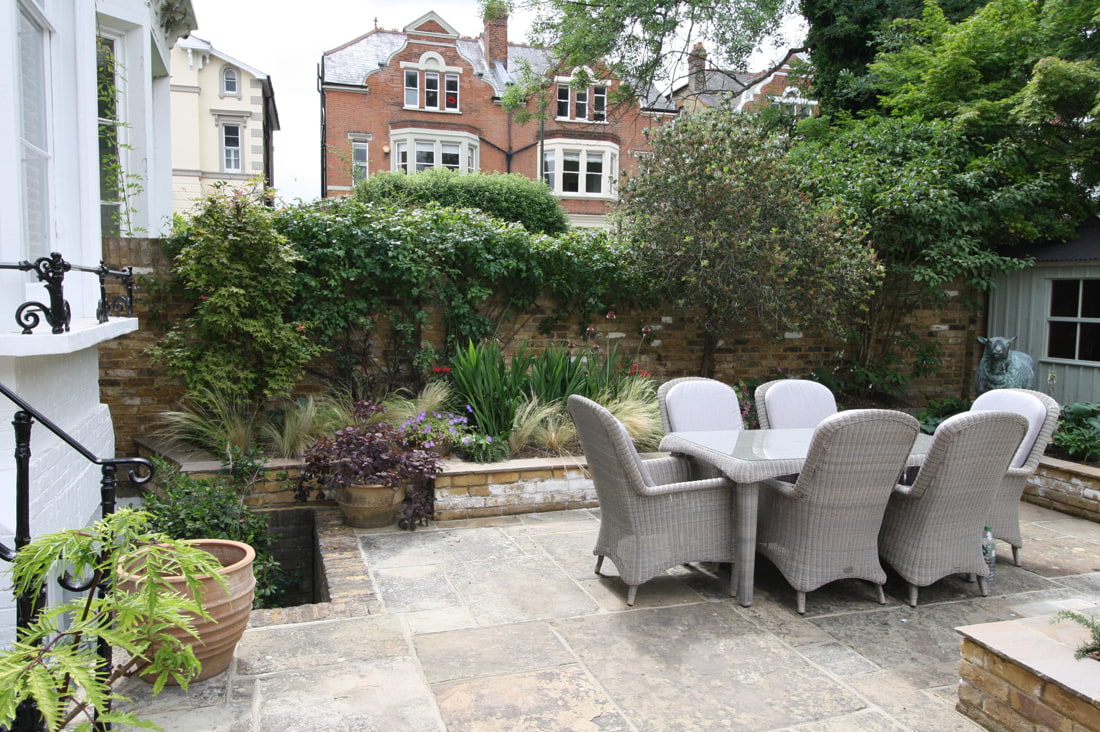 Construction was carried out by my friendly family team of landscapers. The raised beds were built from new bricks as close in appearance as possible to the old stocks in the walls and a year or so on it’s hard to tell that there’s any difference between the two. The existing paving was carefully cut using a diamond blade to give a nice clean line to the new bed edges and the old pointing was carefully removed so as not to damage the stones and replaced with a bird’s beak design to add a bit of character.

The pergola looks fantastic, however, lifting 3m long, 150mm square solid oak timbers above your head was no mean feat!  It was worth it though, as the area of the garden nearest to the house can become a serious suntrap, the pergola and climbers provide a cool shady home to the small seating area the Client wanted.

Once all the hard landscaping was finished and their rubbish all removed, I moved in and shifted several tonnes of topsoil and compost through the side access to fill all the new beds, followed by the lovely lush plants the Client wanted.

I left with very happy Clients and have been back since for a bit of a tidy up to find them still highly delighted with their new garden and looking forward to relaxing in it this coming summer. 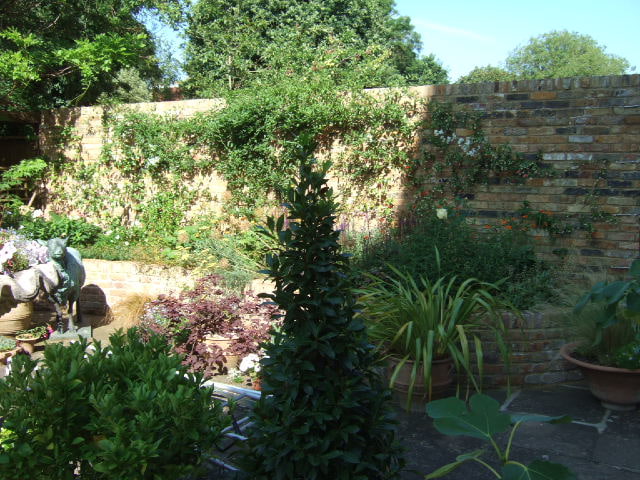 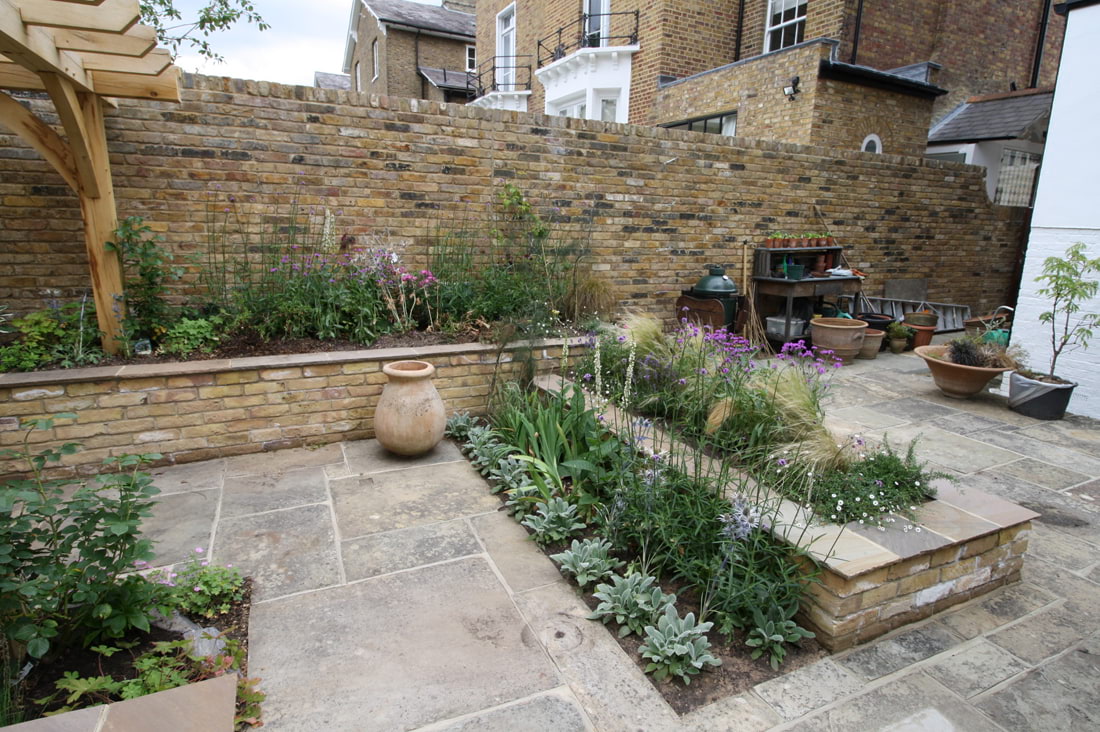 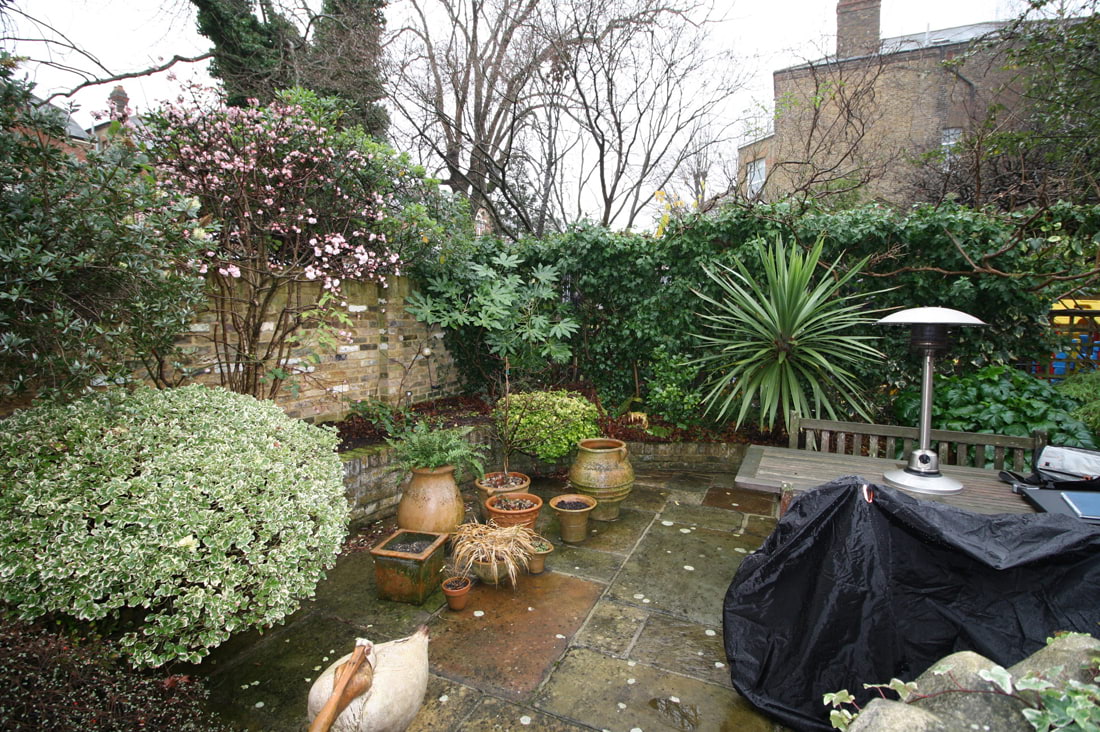 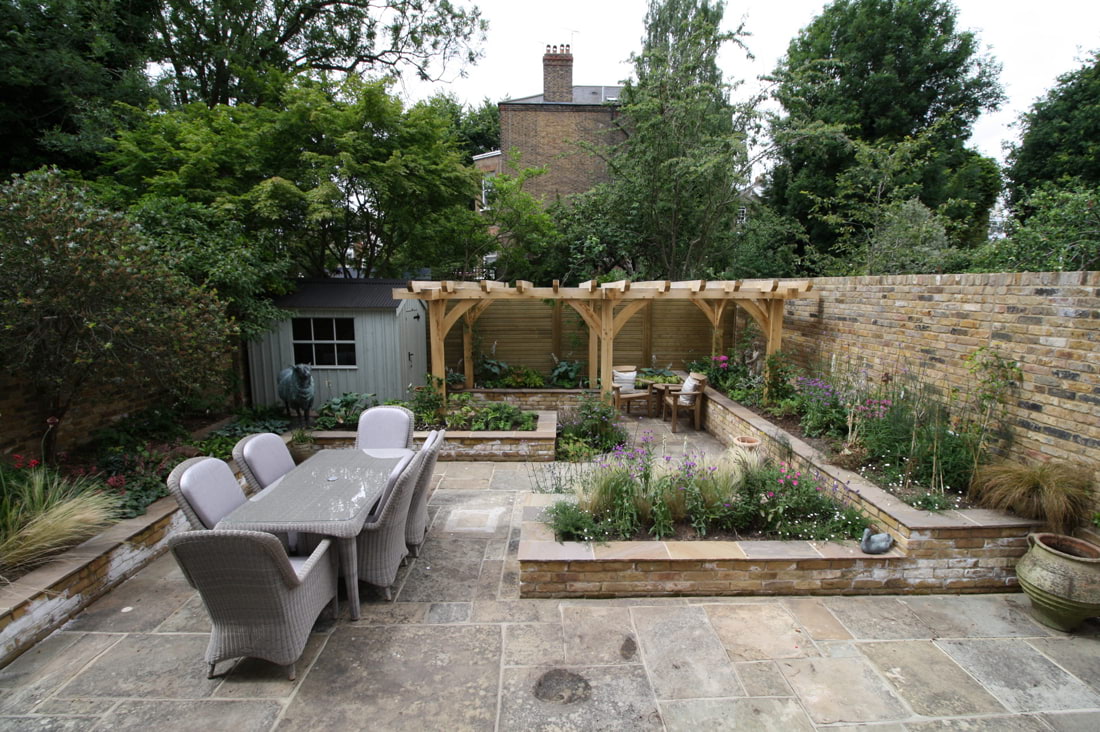